One of the great joys of this hobby we call Town Ball Tuesdays is that ballplayers, coaches, and fans all over the state follow the blog and our social media ramblings, and often reach out to us with invitations to visit their parks (inquiries that are sometimes sweetened with offers of beer, food, and even team apparel—fine incentives all).

Early last summer, we were contacted by both the New York Mills Millers and the Urbank/Parkers Prairie Bombers about visiting their yards for special event nights around the July 4th holiday. The Millers were to host Bluffton in their annual Independence Day matchup on Saturday the 1st, with fireworks and a special ceremony honoring their late coach and local baseball fixture Russ Jacobson (for whom their park is named.)

The Bombers were hosting the Carlos Cougars in their “Legend of Earl” game on Monday the 3rd, with free beer and the two teams vying for possession of the rivalry’s traveling trophy bat for a year. Being that New York Mills and Urbank sit only about 30 miles from one another in the lake-speckled area north of Alexandria and my schedule was open that weekend,  I was intrigued, to say the least. 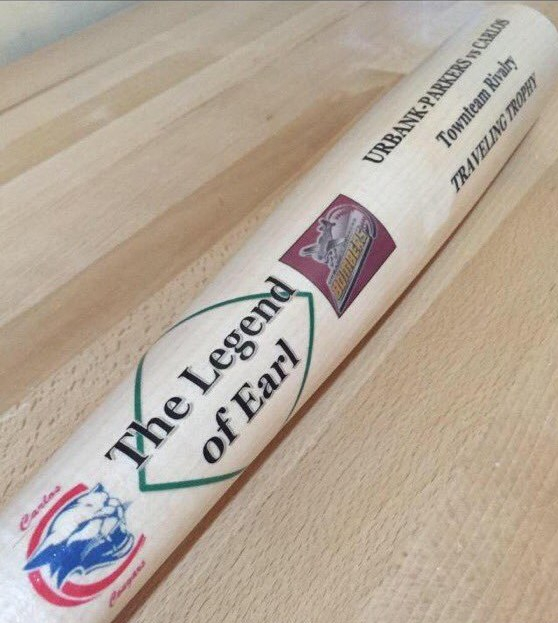 Reviewing schedules around the area, I saw that the Midway Snurdbirds, just a few miles from New York Mills, would be hosting the Huntersville Horseflies on that Saturday afternoon, then traveling to Wolf Lake for a tilt with the Wolf Pack on Sunday. With the Watkins Clippers hosting the Avon Lakers along the way Friday night, I organized a plan for a four day, five game junket into the North Woods.

With Marty unable to attend that weekend, I grabbed my trusty canine sidekicks Maybelle and Skeeter, a tent, a cooler, and plenty of bug spray, and headed out northwest on Friday afternoon. We arrived in Watkins just after first pitch. I had been told of their impressive facility, which had been upgraded in recent years when they played co-host for the State Tournament, and the reports held true.

Sitting on the edge of treeless farm acreage, beneath an impossibly large, blue sky, the park (known simply as Watkins Clippers Baseball Park) rests on the western edge of town, just north of Highway 55, south of Cold Spring and west of Kimball. The ballpark’s walls and roof bear a distinctive shade of blue, trimmed with teal and white accents. The grandstand’s floor planks features a third azure shade, all complimenting the nautical theme of the team’s namesake. 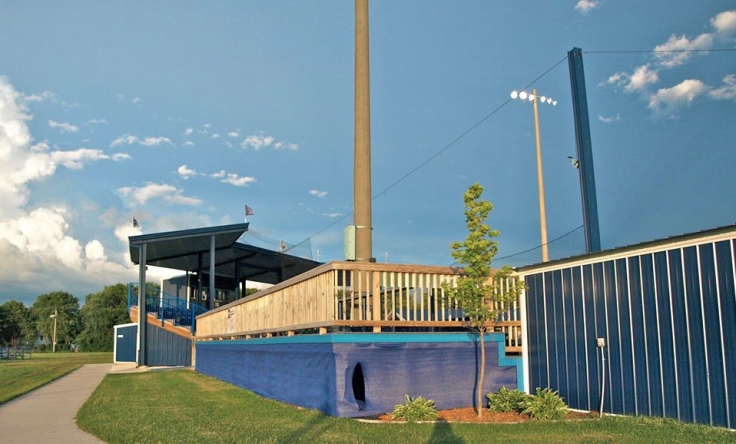 Past the 3B dugout, the park features one of the most expansive party decks in the state, which offered a great bird’s-eye view of the action as the sun set blindingly behind the western horizon.

My journey off to a splendid start, I headed north, following the conclusion of the game, to find a place to spend the night. 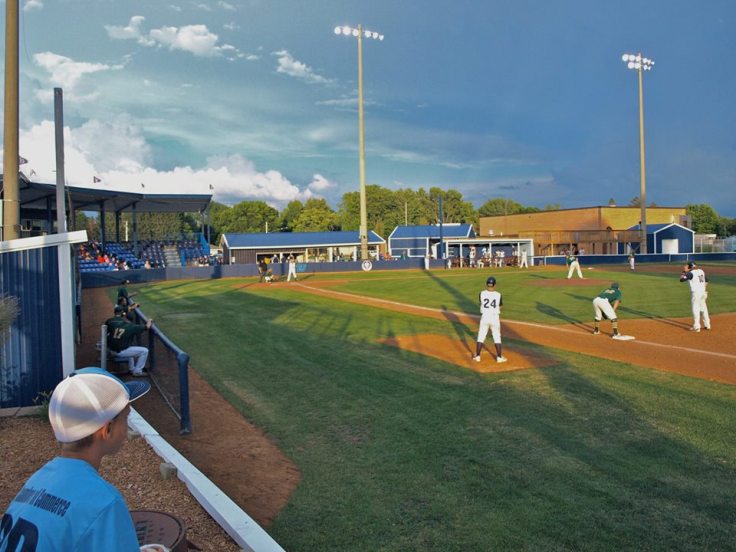 After a good night’s sleep in a campground north of Staples, we headed out toward the fabled Matt Leritz Stadium, home of the Midway Snurdbirds, stopping to peek at a few of the other Lake and Pine League ballparks along the way.

The remote nest of the Snurdbirds is located along Becker County Highway 47, just northwest of Menahga. Its amenities are minimal: A row of sun-faded plastic bucket seats sit behind the net backstop strung between a low set of vertical posts, bound to a knee-high wooden barrier wall. The concession stand is a small metal shed, the dugouts made of blue-painted concrete block, the improvised restroom like a scene from a horror film, the long-forgotten manual scoreboard overgrown with foliage, and creeping weeds fight to overtake the infield. Pickup trucks, fans sitting on their tailgates or in lawn chairs in the cargo bed, represent the box seats in Midway. Children play a pickup game on the miniature ballpark, Shane Keranen Field, beyond the 1B dugout.  There is no PA announcer, no walk-up music, and the beer selection is whatever you picked up at the Liquor Store in Menahga (Although I’m told the Snurdbirds maintain a strict prohibition on Busch Light).

Matt Leritz stadium is everything I could have possibly hoped for. 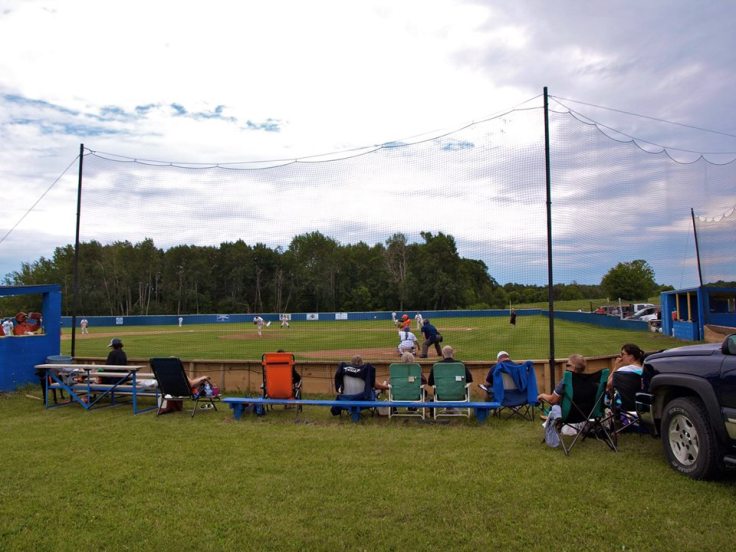 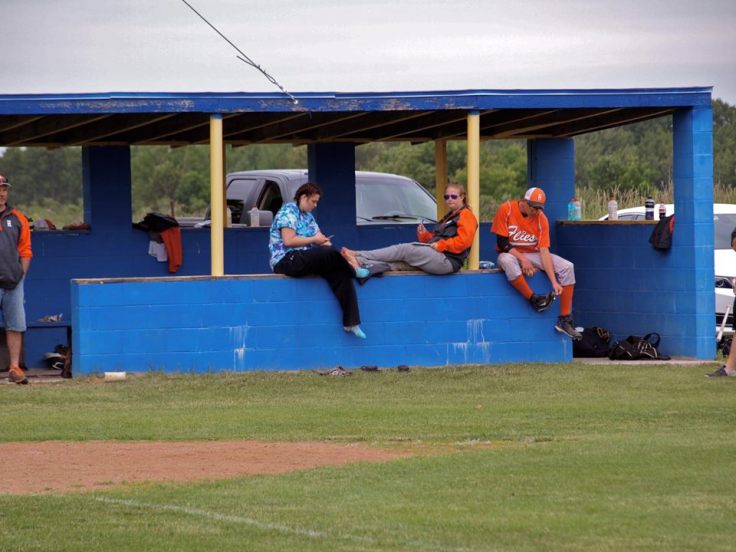 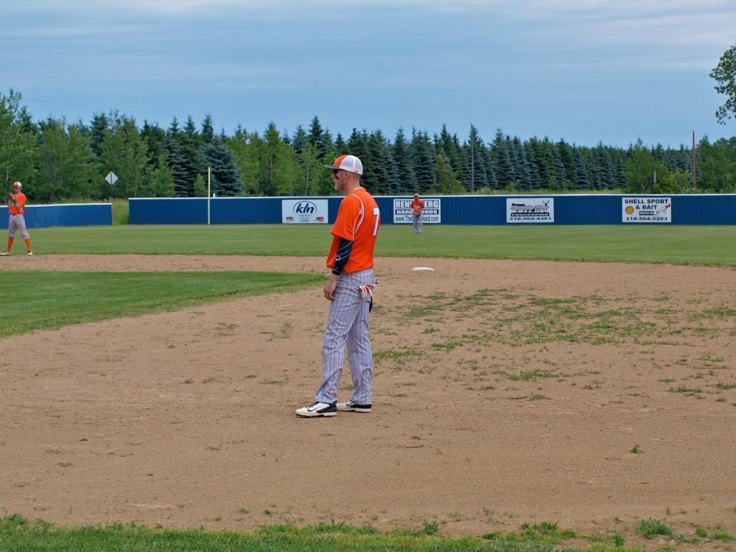 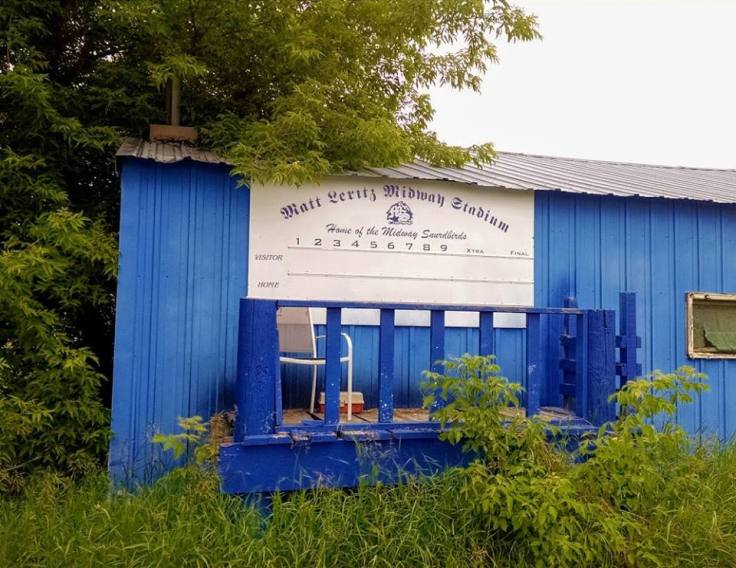 The sun came and went from behind intermittent walls of cloud throughout the breezy afternoon, mimicking the seesaw battle that the Birds faced with the upstart Horseflies, eventually escaping with a narrow win. Old veterans of northwoods townball shared stories of their baseball exploits with me as they bantered back and forth with the umpire in Finnish. Following the game, the remaining members of the 2010 State Champion Midway team requested a group photo and kindly shared a beer with me. 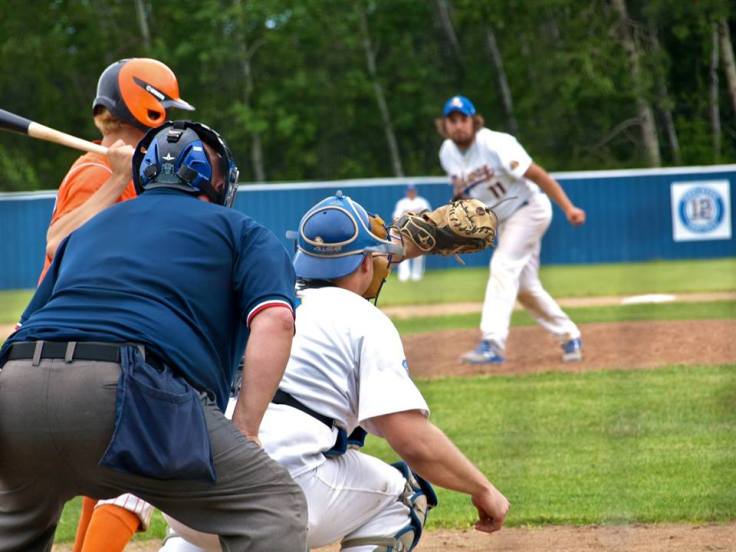 The dogs and I bid the Snurdbirds farewell for the day (I’d be returning north to see them play at nearby Wolf Lake the following afternoon), and we headed south to New York Mills.