Hutchinson wasn’t off to a good start as co-host of the 2016 state amateur tournament. Drenching storms in the area had rendered Veterans Memorial Field unplayable during the tournament’s opening weekend, forcing games to be moved to Litchfield and ultimately Brownton. A new round of rain during the second weekend created additional concerns as I loaded up my crew and, with cautious optimism, headed toward Hutchinson.

The rain, for the most part, had ended during the morning hours, but it’s effects were visible, with wet surfaces everywhere and a large puddle welcoming baseball fans passing through the park’s sculptural Gary Henke Memorial Gate. Cloudy, gray skies overhead threatened more precipitation as crews prepared the field for the 1:30 game between the Hadley Buttermakers and Regal Eagles. 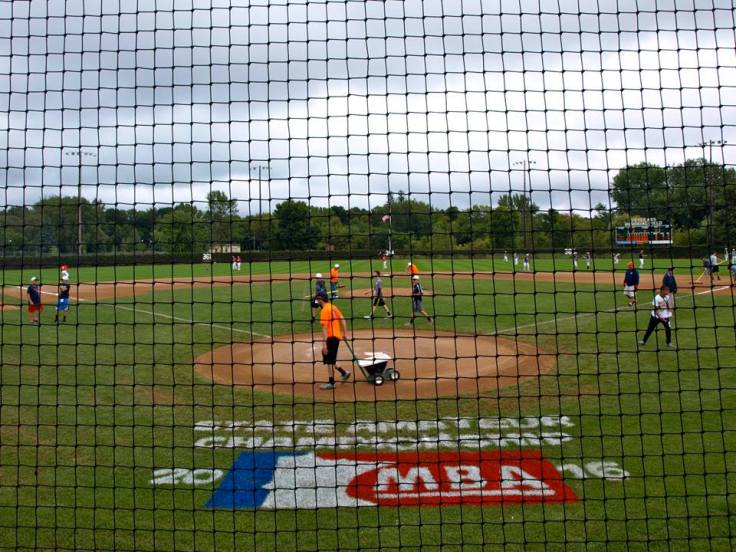 The morning game had been completed in quick fashion, with Sobieski 1-hitting the Ortonville Rox on their way to a 6-0 victory. As the morning game’s attendees filed out of the park, the grounds were refilled with Regal fans donning their bright red attire, and Hadley’s notoriously enthusiastic supporters in shades of black and gunmetal gray. Some carried hand-made signs, some came with faces painted in team colors…all brought lofty ambitions of deep tournament runs for their tiny, rural towns (2010 census reporting placed Regal’s population at 34, Hadley’s at a whopping 61). 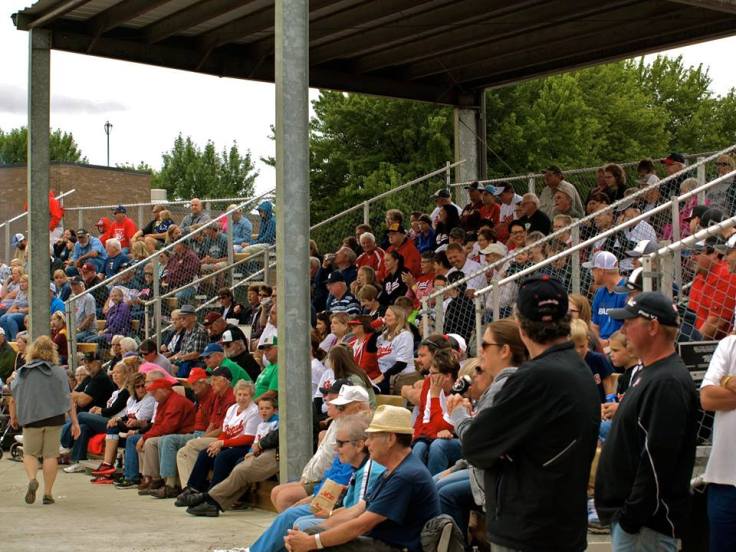 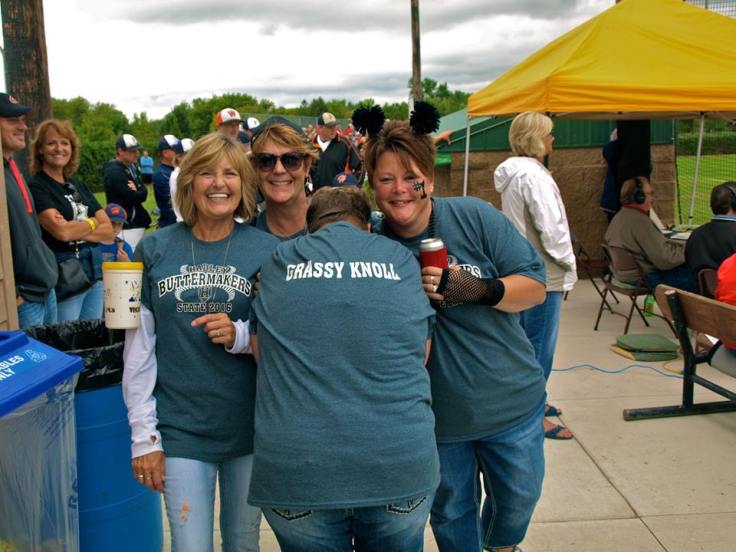 Veterans Memorial Field is an outstanding facility, from its signature limestone retaining wall/backstop to the thick ivy that engulfs the outfield fence. With many wide open areas for fans to gather, a large concession/press box building, a classic scoreboard, and ground-level dugouts, the field’s rather quaint covered grandstand structure seems almost out of place (though more than sufficient for regular season games. The State Tournament’s large crowds required, of course, additional metal bleachers to be dropped in temporally down both baselines.) The park’s dug-in playing surface puts spectators slightly above field level, creating great site lines. Signs posted down the lines issued onlookers stern warnings to stay off the walls and beware the risk of flying baseball equipment. 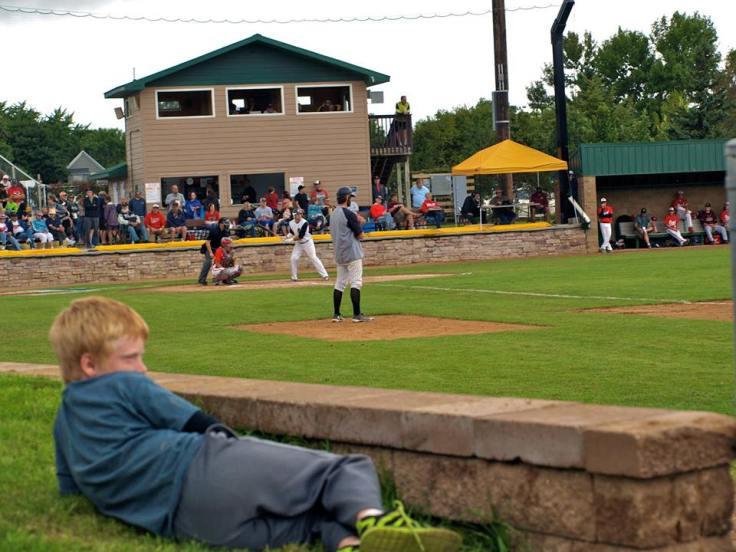 The rain would hold off that day, but Regal was unable to hold down the Hadley bats. Even with the support of their Atwater Chuckers draftees, in their eccentric lemon-lime jerseys, they were topped 12-1 in only 7 innings, doomed by a 10 run Buttermaker outburst in the 5th (after the Eagles had made the game 2-1 with a run in the top of the inning. 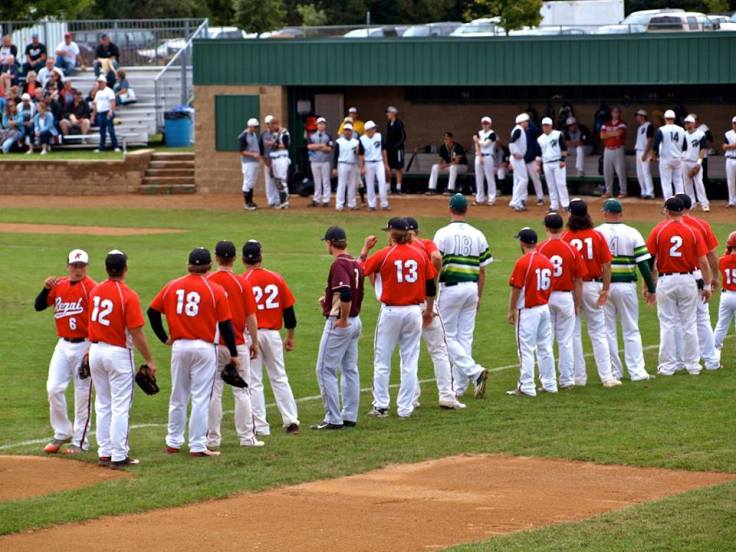 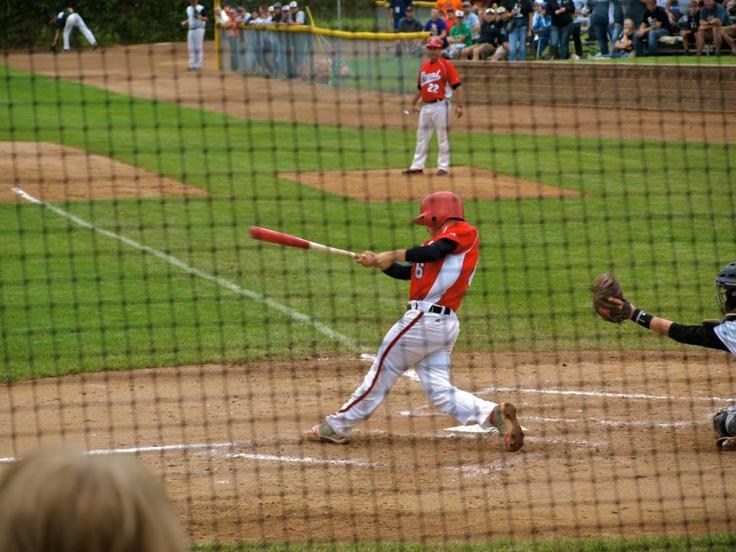 We returned to Hutchinson under friendlier skies on Labor Day weekend to catch what turned out to be an incredible game between the host Hutchinson Huskies and the defending state champion Plato Bluejays. In thrilling fashion, the Huskies would break a tie with a pair of runs in the 8th, and use some timely defense to hold Plato to only two runs on 16 hits, jubilantly celebrating an upset victory in their home yard while Plato’s large royal-clad fan base looked on in disbelief. 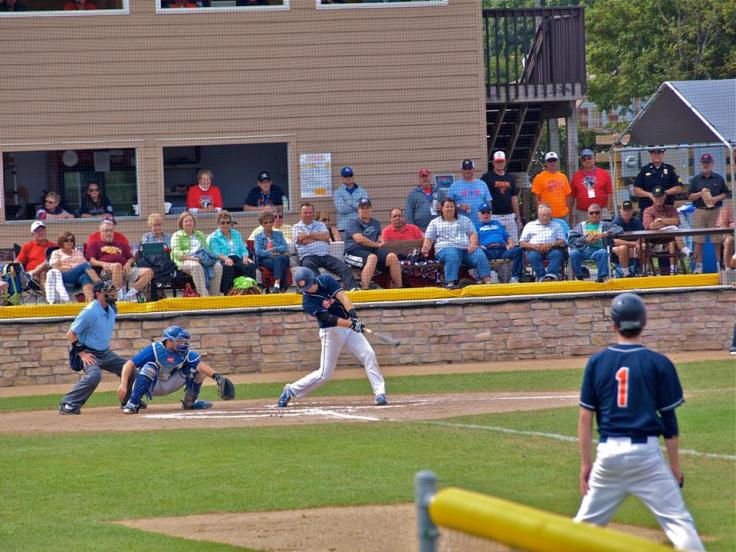 Even the members of the Lastrup Lakers, winners of the morning game and awaiting the 5pm contest, were glued to the action. Most of them, anyway. 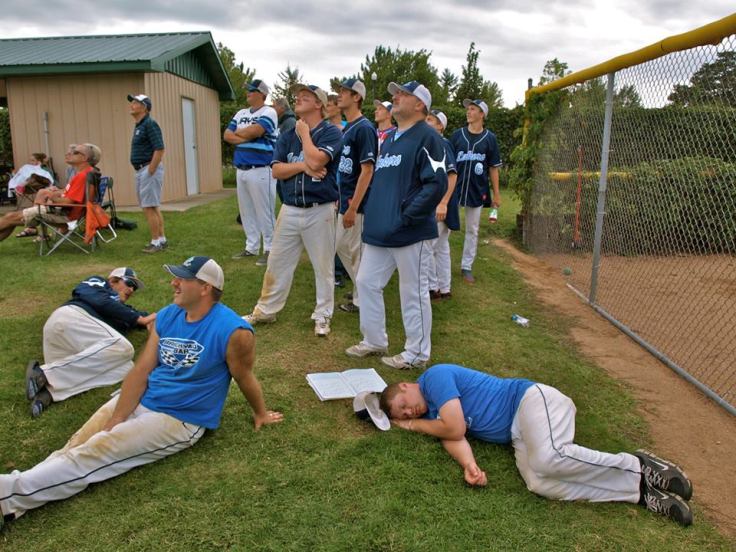 In the evening game, however, Hutchinson’s dreams of a state championship would be put to rest by the Sobieski Skis, who defeated them 8-3 behind 14 hits of their own.

The Class B Championship matchup between the Moorhead Brewers and Miesville Mudhens brought us back to the park on a sunny Labor Day afternoon. Moorhead had fought their way to the championship through the losers’ bracket, famously leaning on two complete games from a single pitcher on the same day for a chance to bring home the title. Perhaps out of gas, or maybe outmatched by a strong Mudhen squad, they would end their impressive tournament as runners-up, with Miesville taking home the title in a 6-3 game.

Despite early misfortune, Hutchinson was a deserving and impressive site for their share of  the 2016 State Tournament. Their grounds provided an outstanding atmosphere for many memorable games, and their staff was exceptional. Hutch’s Veterans Field is a park well worth a visit for any baseball fan.