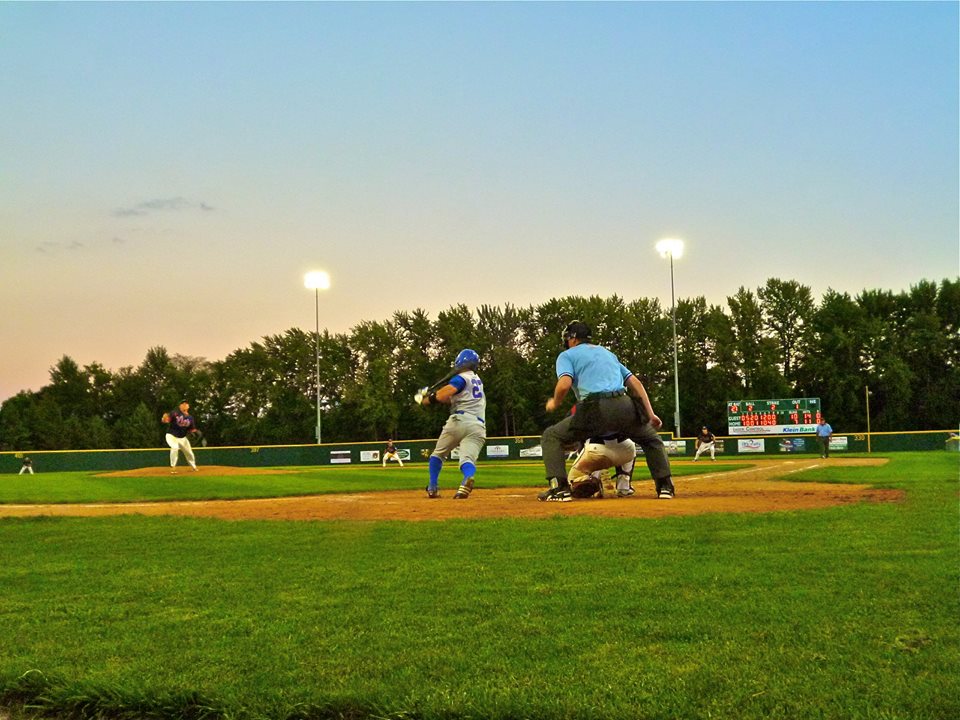 The route west from the Twin Cities along Minnesota State Highway 5 takes you to some of the state’s most storied baseball towns and their cathedrals: Gaylord, Arlington, Green Isle, Hamburg, and Young America and the slick, modern stadiums of Waconia and Chanhassen. Amid these temples lies Victoria’s Poppitz Field, home of the Victoria Vics, a storied club in their own right, their modern incarnation a town ball mainstay since 1974, and winners of the 2012 Class B state championship.

Sitting on the south end of Lions’ Park, a spacious multi-use facility, the field was named for long-time Victoria baseball figure Mike Poppitz and christened in a 2009 ceremony.

Lacking the covered grandstands of its highway 5 neighbors, Poppitz’ primary fan accommodation is the covered area extending from the building housing the field’s concession stand, bathrooms, and storage. With no shelter from the late-afternoon sun, the majority of fans positioned themselves on the picnic tables beneath the roof as the Vics took on the Chaska Cubs in the opener of their Section 3B, best-of-five playoff series.

The playing surface at Poppitz made me envious of the boys on the field. The grass was radiant, the parallel mow-patterns showcasing its luminescent green tones beneath the bright blue sky. The tall emerald walls designating the limits of the outfield give the yard a professional look, complimented by the field’s large, bright scoreboard. The infield basepaths were manicured to a smooth, flawless finish.

Poppitz’ largest drawback is its heavy chain-link fence and supporting columns and crossbars that create so many obstructed views for fans wishing to watch the game from the simple metal risers behind home plate. The corners of the backstop, in particular, make the observer feel far more detached from the game than would ideally be the case, sitting so close to the action, particularly when doubled with the mesh fencing across the front platform and down the ramp of the bleacher. The low fences and accommodating bleacher sets down the left and right field lines offer better views for fans, but the proximity of the field to the dugout of the adjacent softball field on the first base side makes for some very tight quarters. 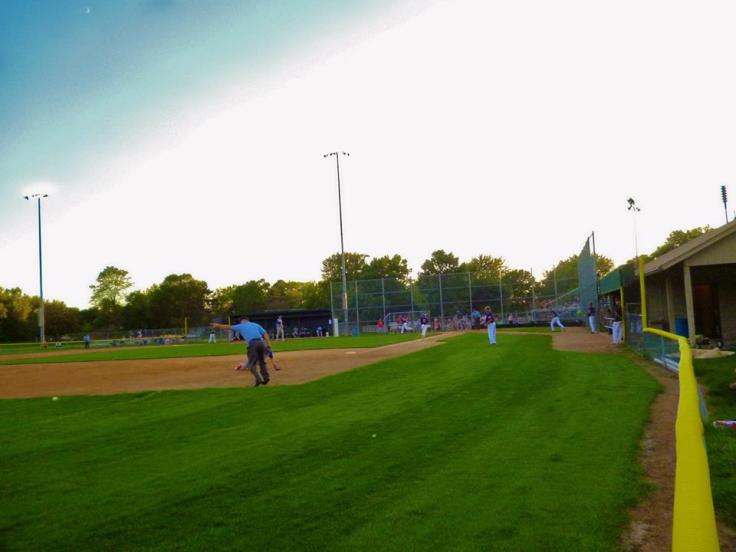 As with most of Minnesota’s southern ballparks, the sun’s decline into night creates a magical scene, which both compliments the aesthetic and accentuates the drama of a good game of ball. On this clear night, the visuals were astounding. 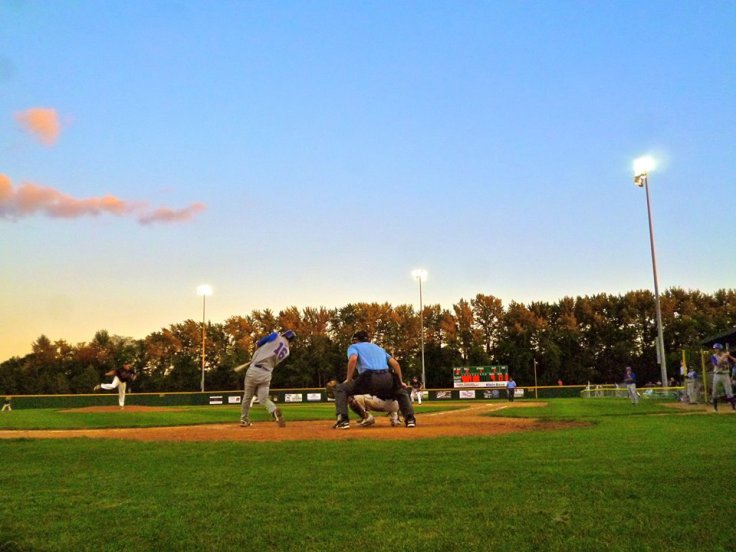 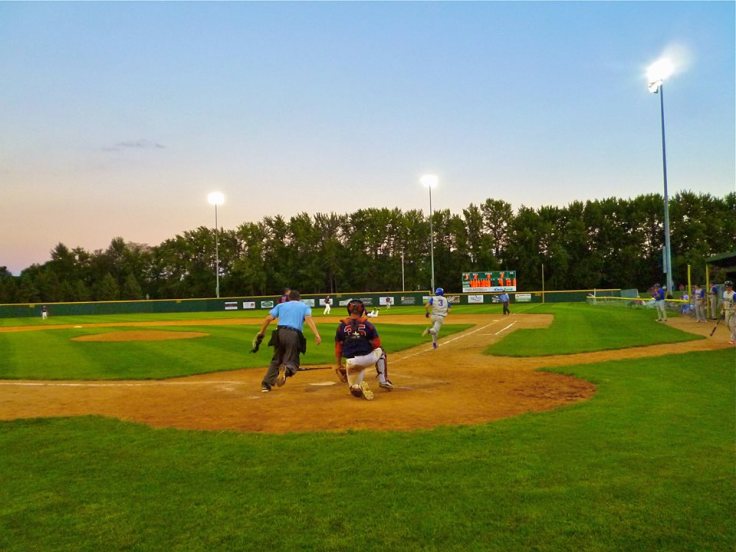 In the end, Victoria’s Poppitz field is a very nice park to enjoy a ballgame in, only a few minutes from the heart of Minneapolis. As a blooming community, with a highly respectable and competitive ballclub, I’d love to see the field outfitted with a few modifications, including a proper grandstand and higher visibility netting to replace the obstructive backstop fencing. Poppitz Field more than deserves to rival its local competitors as one of the region’s finest ballparks. 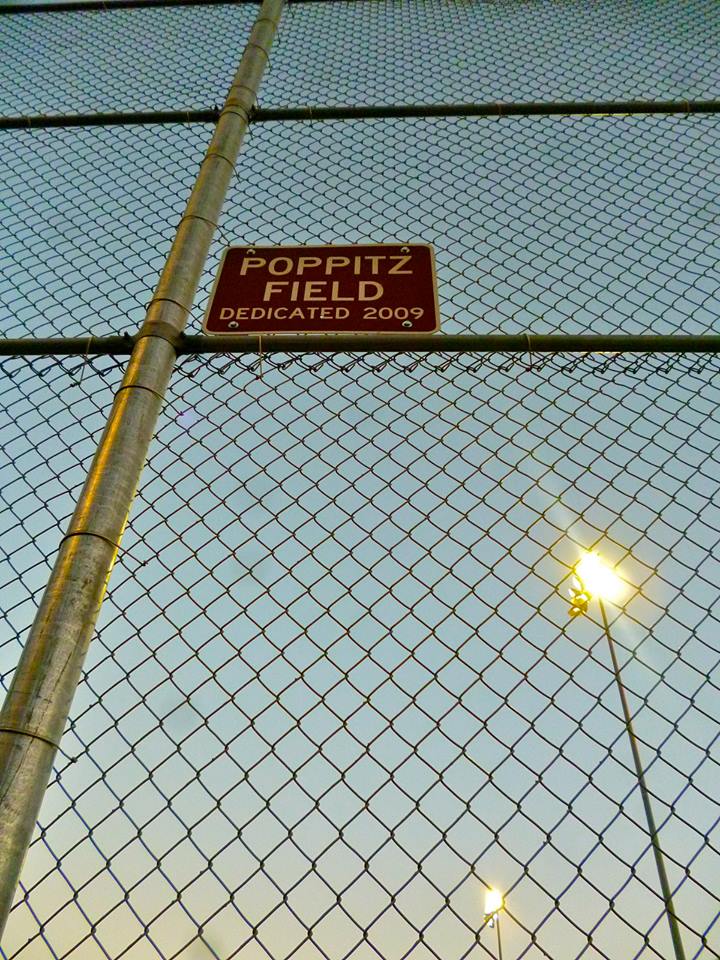